Home Data Modeling The U.S. Navy Wants to Build the World’s First Fully Autonomous Fleet, and BigBear.ai’s Ursa Minor is Helping them Turn a Big Idea into a Reality

The U.S. Navy Wants to Build the World’s First Fully Autonomous Fleet, and BigBear.ai’s Ursa Minor is Helping them Turn a Big Idea into a Reality

Building a fleet of driverless vessels to patrol open waterways and predict future threats isn’t the plot of a highly-anticipated summer sci-fi blockbuster flick – it is the near-term goal of the U.S. Navy.

While Congress passed a record-setting 2023 U.S. Defense Budget in December, increasing concerns over the growth of the Chinese navy, the robust job market creating challenges in recruiting new sailors, and the plans to decommission a few dozen vessels highlight the fact that an 8% increase is hardly a windfall. President Biden called for a 4.6% across-the-board pay bump for personnel, enhanced cybersecurity capabilities, and the adoption of emerging technologies to ensure the military can prevail on the modern battlefield in his 2023 Department of Defense budget request – all of which are expensive.

So, while news headlines may indicate that the Department of Defense is flush with cash, once factoring in climbing inflation and Presidential priorities, military leaders are essentially being asked to do more with less. 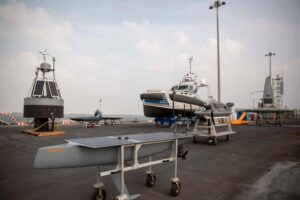 As a former intelligence officer who proudly served on deployments to Iraq and Syria before transitioning to my role at BigBear.ai, I know firsthand how time-consuming and arduous collecting, synthesizing, and analyzing data can be. By the time I delivered my findings to decision-makers, the information had often become “stale and unusable.” In essence, I spent an incredible amount of time and effort preparing obsolete intelligence by the time it hit the command staff’s desk. It seemed wasteful to dedicate so many resources to intelligence gathering that wasn’t moving the mission success meter.

However, my service time came as paradigms were shifting in the Pentagon. Just as Michael Lewis chronicled how the Oakland Athletics embraced data to challenge the conventional wisdom in what it took to build a successful baseball team in Moneyball, the Department of  Defense was realizing that a seismic shift in warfare was on the horizon.

Throughout history, the United States had operated under the assumption that the key to establishing the world’s most dominant military was correlated to stockpiling assets: troops, guns, tanks, and planes. However, the tide has shifted in recent years toward mission success hinging on information: access to reliable real-time data and the technology to sniff out patterns and accurately predict future events.

The Navy had a particularly puzzling riddle to solve. As you probably learned way back in elementary school, over 70% of the Earth’s surface is covered by water, and 96.5% of the world’s waterways are oceans. While the United States has relied on unmanned aerial vehicles for years to execute intelligence-gathering and combat missions, their usefulness is limited by their range. Quite simply, UAVs can’t travel far enough from land to deliver maritime intelligence. In the words of Vice Admiral Brad Cooper, “We’re going to stick with our general model, of there will be no drone operating that has intrinsic value that is operating at sea.”

Closing the intelligence gap would require an incalculable amount of human, financial, and natural resources to build and deploy long-range aircraft for gathering maritime intelligence utilizing crewed aircraft. Additionally, satellite imagery is valuable, but variables such as weather and orbit patterns make it an unreliable source of real-time information.

Thus, the Navy needed to think outside the box. While consumer automakers arguably have a long way to go in creating driverless cars, that doesn’t mean the idea should be scrapped altogether, nor does it mean that unmanned vessels are the entirety of the solution.

In September 2021, the U.S. Navy established Task Force 59 to explore ways to strategically infuse emerging technologies, such as AI/ML, to deliver the world’s first unmanned surface fleet. With the ultimate goal of providing “deterrence by detection,” sailors will be armed with more reliable and actionable intelligence than ever.

Despite the small number of mostly reservist sailors assigned to Task Force 59 in the initiative’s early phases, its work quickly turned heads in the Pentagon. On the heels of the program’s success, Vice Admiral Cooper announced plans to reach 100 unmanned surface vehicles patrolling Middle Eastern waters.

With proof of concept in hand, Task Force 59 organized Digital Horizon, a 3-week event in Bahrain in late 2022. The exercise consisted of tests and showcases of 15 unmanned systems developed by 17 companies.

Ursa Minor leverages AI/ML to create descriptive analytics to make sense of what happened in the past, then generates predictive analytics to forecast future events. Since accurate forecasting relies on the breadth and depth of data sets, Ursa Minor enables decision-makers to use both traditional and non-traditional data sets, including social media, news media, Radar, weather, and enterprise data sources, to name a few.

At Digital Horizon 2022, Ursa Minor flexed its muscles in accurately identifying and classifying vessels in daytime and nighttime exercises while distinguishing the weapon systems equipped on the observed crafts. Additionally, Ursa Minor proved that incorporating the outputs into innovative computer vision models can help Navy decision-makers by alerting them of potential threats by delivering consistent decision-quality information.

During the four-week exercise, BigBear.ai had its first opportunity to operationally test Ursa Minor in real-world scenarios. During the event, three analytics and four computer vision models were deployed into AFS’s Common Operating Picture, consolidating data into a single interface to enable better collaboration across teams executing missions.

Understandably, when a technology transitions from development to a live environment, it isn’t always sunshine and roses – just ask Bill Gates! However, Ursa Minor clearly showed how AI/ML can deliver top-notch descriptive analytics and accurately predict future events on current and future battlefields.

Through a series of scenarios facilitated by Task Force 59 and the 5th Fleet, BigBear.ai’s Ursa Minor delivered five critical successes that made it stand out in the exercises in Bahrain:

Unmanned vessels (aerial, surface, and underwater) are critical components of future warfare, but all run into the same problem: how do decision-makers get the right asset into the right place at the right time to execute missions?

As I previously mentioned, the world’s oceans are huge, which creates opportunities for the bad guys to conceal adversarial operations. Ursa Minor eliminates blind spots by sifting through data to flag suspicious behavior using AI/ML that human eyes would often miss. Additionally, high-fidelity algorithms can provide decision-makers with recommended time windows that give missions the highest likelihood of success.

As warfare continues to evolve, operators and analysts need analytics suites like Ursa Minor to deploy an easy-to-understand user interface on a “single pane of glass” that will arm decision-makers with the information necessary to prevail on the modern battlefield.

What’s Next for Ursa Minor and BigBear.ai

BigBear.ai is proud to have recently accepted an invitation to participate in a follow on exercise to continue expanding Ursa Minor’s capabilities that we showcased in Bahrain in late 2022. We’ll share more details about the upcoming event, and we’re excited to continue to find ways to improve Ursa Minor to best suit the needs of the Navy. Stay tuned!

Iterative expansion and testing of our technology and algorithms are essential to providing best-in-class capabilities to warfighters in high-stakes environments. But, as they say, practice makes perfect, and we’re working every day to better understand how Ursa Minor, and BigBear.ai’s other solutions, can help customers like the Navy solve complex problems.

We’re also developing additional use cases to bring Ursa Minor to new customers working to harness the power of AI/ML and computer vision to deliver innovative approaches to modern problems. Notably, we’re also participating in the Office of Naval Research’s SCOUT competition to improve systems and intelligence in the Southern Command’s operational environment.

After leaving the service, I knew it was my new duty to help develop and deliver critical technological advancements to those in harm’s way by reducing risks and saving lives.

BigBear.ai and the incredible team of developers, engineers, and architects have allowed me to turn that mission into a reality. Ursa Minor is the technology I wish I had while on my tours to Iraq and Syria. It is a customer-informed and approved piece of technology that continues to rapidly improve through iterative operational tests to deliver the invaluable intelligence and predictions essential to prevailing on the modern battlefield.

By embracing technologies like Ursa Minor, customers will be able to operate with more agility and efficiency. Timely information is the key to success not only in military operations but also in our everyday lives. For example, some information is already outdated when a newspaper plops on a subscriber’s doormat. Leveraging the power of AI/ML will slash the man-hours it takes to make sense of data to allow them to spend more time working on a higher-level strategy that contemporary technology cannot yet reliably deliver.

We look forward to continuing our current partnerships and look to include more as we scale this critical capability to meet the demands of an ever-changing global environment!

The More ‘Eyes On The Water’, The Better (marinelink.com)